Note: The gallery view doesn’t support linking from the images, so the caption has the controller name and I’ve left a comment with a direct link to it in Xbox Design Lab.

My favourite project at my previous employer was making a car configurator for BMW. I wish I could share our initial prototype as it was immensely satisfying, but here are some slides showing what we did:

What I loved the most was all the high quality images for all possible configurations. So no matter what choices the user made, the car looked fantastic. This was back in 2011 so pre-rendered images was the way to go. Now it’s 2016 and Microsoft just launched the Xbox Design Lab which allows you to design your own controller and see it update in realtime in 3D. It felt so great that I’ve been playing with it all night and woke up early full of ideas for thematic controllers!

I naturally started with red and black, as I always found that combination stunning. It’s not surprising that Deadpool picked that as his suite colours when he  honoured Spiderman. 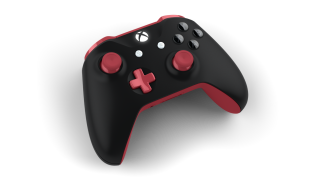 I could probably do a whole gallery of just the Batman family of heroes, but I kept it to what I think would be most recognisable. Today Batman is mostly depicted as black and dark gray with an occasional yellow, but he started light blue and light gray with yellow. So I went for a few variations.

I tried making a Robin Retro but just couldn’t get it to work.

I kept it simple with just green and yellow, then adding their distinct colours as highlight.

My first attempts just playing with the tool looked a lot like a Decepticon, so I rolled with it. I’ll play a bit with the logos later as these turned out to be more references to specific transformers.

The Nintendo and Super Nintendo consoles

I’ve been playing around with RetroPie, with my own UI for it, and hopefully I’ll blog about that soon. The iconic look worked out pretty good IMHO.

I remember the Voltron series as a kid, and if you haven’t seen the Netflix remake it’s worth checking out! I wanted to use the coloured X/Y/A/B buttons as a subtle hint to the combined robot form, but the thumbsticks weren’t available in white so the black took over a bit. The lion themed controls turned out pretty good though.

Fallout 1 & 2 are one of my favourite video games of all time. The newer ones are good games in themselves, and highly popular. So it was no surprise that the most voted controller was the Vault 101 (Fallout 3) blue/yellow controller. I felt I could improve it a bit, and also created a bluer version remembering the older games.

I really hope to see more of this, although the prices have to go down a bit. $79.99 for one custom controller is pretty pricey, and then add shipping and customs/tax it’s just a no. For now.

John-Philip "JP" Johansson is an Experienced Software Engineer with a Passion for Business.